DES Tunnels and Trenches Kept Up to Date

You are here:
Nashville District Energy 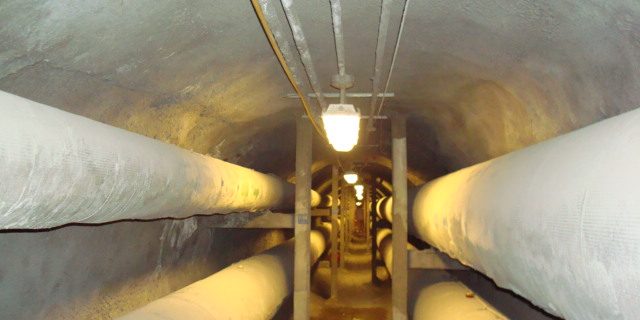 Beneath the busy streets of downtown Nashville, there’s “traffic” of a completely different sort. The Metro Nashville District Energy System (DES) includes roughly four miles of trenches and tunnels with 84,000 feet of piping, distributing energy to numerous customers. Of this total, some 5,800 trench feet are within the system’s main tunnels below Broadway (2,100 feet), 4th Avenue North (2,000 feet) and 7th Avenue North (1,700 feet).

These remarkable tunnels were constructed during an expansion of the system in the mid-1980s. The effort required large boring machines to drill holes eight feet in diameter through solid rock 40 feet below the surface.

Over time, however, ground water and water from naturally occurring area springs seeped in. This water has rarely accounted for more than an inch of fluid on the tunnel floor, but it deteriorated the tunnel rock all the same. Portions of the rock became detached from the tunnel walls and ceiling.

Several years ago, in an effort to continue providing its customers the best level of service and avoid potential issues, Metro Nashville DES hired a contractor to stabilize the worst tunnel sections. This time, the work involved the drilling and placement of six-foot-long rock bolts at the 10 o’clock, 12 o’clock and 2 o’clock positions of the tunnel perimeter. Drainage wicks were then installed along the length of the tunnel at the 12 o’clock position, as well as circumferentially along the tunnel. Spacing varied depending upon the amount of water infiltration, but at a minimum of every four feet.

Next, a four-inch-by-four-inch heavy wire mesh fabric was attached to the tunnel walls and ceiling, leaving a two-inch gap between the wire and the surface. A “shotcrete” concrete mixture was then blown onto the walls and ceiling, creating a new interior tunnel surface a minimum of four inches thick.