You are here:
Nashville District Energy 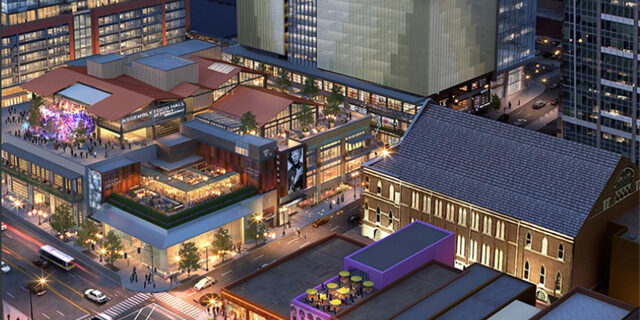 In April 2020, the valves were opened, and chilled water began circulating through sections of the new Fifth + Broadway development in downtown Nashville, Tennessee, making it the most recent new customer of the Nashville District Energy System (NDES.)

“We’re proud to be the newest customer of the Metro Nashville District Energy System,” said Burgin Dossett, VP, Development | Mixed-Use at Brookfield Properties. “It is a significant benefit to our project to be able to tap into DES’s services. At Fifth + Broadway, we are delivering a singular mixed-use project at a scale never seen before, and DES has been an integral partner in providing solutions that will allow our retail, restaurant and entertainment tenants along with the National Museum of African American Music to operate effectively and efficiently.”

Fifth + Broadway is one of the largest mixed-use developments in the history of Nashville and is located in a vibrant section of downtown. The project includes a contemporary residential tower, a 372,000 square foot Class-A office tower, 200,000 plus square feet of retail and entertainment space including rooftop restaurants, the first-of-its-kind National Museum of African American Music, and more than 2,000 parking spaces.

District energy supplied by NDES provided substantial flexibility for the developers of the project. NDES engineers and the developer worked together to address the needs of the project and how they could best be serviced through the capabilities of the NDES. The result was a new chilled water service without modification to the NDES distribution system while providing the capacity and flow desired by the project engineers.

By not having in-building chilled water generation systems, the development saved critical space thereby increasing leasable square footage within the project. With all chilled water generation performed remotely, the entire rooftop of the development became available for functional space for tenant expansion, including premium outdoor venues. Chilled water being provided by NDES also eliminated the need for cooling towers that would have been visible from the adjacent luxury residential and office towers.

The project site is complicated. It encompasses some components that were connected to the previous Nashville Convention Center which was replaced by the Music City Center (MCC) which opened in 2013. MCC is also served by the NDES and is now its single largest customer. The site also includes an adjacent 673-room hotel, several meeting rooms that were shared by the old convention center and an office tower atop the hotel. All of these buildings receive NDES services for heating and cooling. A portion of the old convention center’s heating and cooling capacity was assumed by the hotel to support the convention center meeting spaces retained by the hotel. This reduced the availability of flow capacity remaining for the new development.

The NDES engineers worked with the Fifth + Broadway development engineers to evaluate the desired loads and the capacity of the services available. Because NDES was able to present specific historic data from its highly diverse customer base with various functional space types, there was confidence in the demand and flow calculations for this new development. A mutually agreeable cooling demand and flow became the basis of an amended service contract.

“NDES provides a smart, financially advantageous option for this development when factoring in initial capital (including infrastructure, facility design and equipment requirements); space utilization; and ongoing operational and maintenance costs,” stated Dan Coyle, president of Thermal Engineering Group, the Project Administrator for NDES, “We are excited that Fifth + Broadway has chosen NDES to help supply its energy needs.”